DETROIT (Nov. 22, 2011) — The Wayne State University Law School Student Board
of Governors (SBG) will be showing their thanks this holiday season by providing
the Thanksgiving meal for Cass Community Social Services (CCSS).

“Cass Community Social Services provides a valuable service to the community, and SBG
is committed to supporting organizations making a difference in Detroit,” said
Ashley Fisher, SBG vice president. “By doing what we can to help raise funds to
support their Thanksgiving dinner, we are showing our thanks for what they do
for the community.”

CCSS is dedicated to making a profound difference in the diverse populations it serves by providing
for basic needs, including affordable housing, promoting self reliance and encouraging community inclusion
and improvement.

Everyone deserves to have a healthy and happy Thanksgiving meal, Fisher said, and SBG is looking to make that possible. SBG is also actively looking for donations to help support their effort and appreciate
any amount that can be given to support the Thanksgiving meal at CCSS.

A voice for others: Michigan courts consider whether to certify interpreters 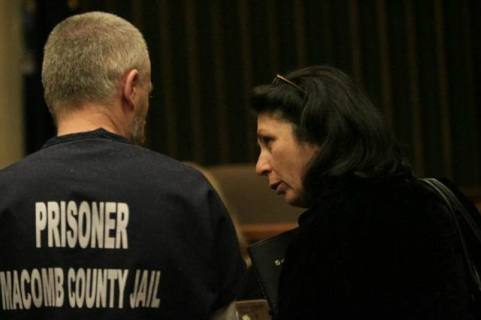 Barie Shaqiri translates for Leonart Nazarko, an Albanian, at a hearing in January in Macomb County Circuit Court. He is charged in the 2009 killing of his wife. / Photos by MANDI WRIGHT/Detroit Free Press 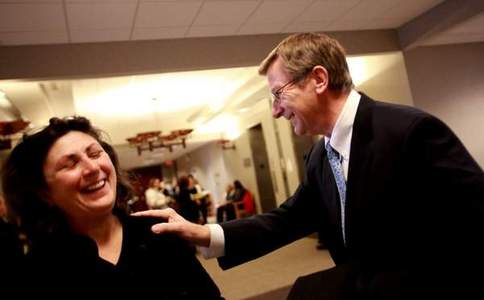 Defense attorney Carl Marlinga talks with Shaqiri after the hearing of his client, Nazarko. Shaqiri speaks four languages and runs a translation service.
BY CHRISTINA HALL

The Michigan courts are studying whether court language interpreters should be certified -- no training is required now -- to ensure good communication for people in court who speak no English or struggle with it. The effort, one of many under way regarding interpreter services, comes as a State Bar of Michigan task force report found that such services are underfunded and "inconsistently applied across courts, in many cases in violation of constitutional and federal requirements."

Failure to address the issue threatens federal funding, it states.

"Every stage of the legal process, from the time police stop a person to the time they walk oust of the courthouse, is important," said attorney Neil Rockind, who is defending Khalil Eweis of Rochester Hills on a drunken-driving charge and arguing that Eweis, a Jordanian who speaks Arabic and little English, wasn't advised of his rights in a language he understands.

Rockind said the Troy officer who stopped Eweis noticed an immediate language barrier but didn't ask for an interpreter or contact a colleague who spoke Arabic. The officer read Eweis' preliminary and chemical breath test rights, but an interpreter wasn't brought in until the booking process, Rockind said. A district court judge denied a motion to dismiss the breath test results. This month, Rockind filed a challenge to the ruling in Oakland County Circuit Court.

"If the system is willing to arrest people, to prosecute them and convict them of misdemeanors and felonies and incarcerate them ... at a minimum, people should understand what is being said to them at all times," he said.

The committee will meet this year, said chairwoman Suzanne Hoseth Kreeger, chief judge of the 8th Circuit Court for Ionia and Montcalm counties. The Michigan Supreme Court would decide courtroom mandates. The office would handle best practices for courts. This year, it will develop a model limited English proficiency plan to distribute to courts.

"I think that this is really an important time to review policies and procedures and do the very best we can in terms of balancing our ability to provide interpreters," Kreeger said. "Justice cannot be completed if we don't understand."

Michigan had the lowest qualification standards for court interpreters, a 2007 Consortium of Language Access in the Courts survey shows. The state joined the consortium to obtain access to exams to assess interpreter competence.

Federal mandates prohibit discriminating against people because of their race or nationality and state that courts receiving federal funds provide interpreters in criminal and civil cases. In Michigan, appointing an interpreter is discretionary in civil cases, according to the Brennan report.

Interpreter services are a concern for the state bar and the U.S. Department of Justice, which is "kind of nudging states to move to court accessibility on language issues" and has done audits in some states, said Candace Crowley, the state bar's director of external development. She said Michigan has a unique opportunity to make a difference on this issue.

Southfield Police Lt. Nick Loussia, who speaks Chaldean, said the 150-member force has more than a dozen officers who speak Spanish, Arabic, Polish and others. In Livonia, a few officers have attended conversational Spanish classes, and the department has distributed Miranda warning cards and quick phrases in Spanish to officers, Capt. Robert Nenciarini said.

Jessie Rossman, a staff attorney with the American Civil Liberties Union in Michigan, said the group received five to 10 complaints about interpreter difficulties in jails and with police departments in about the last year. In 2009, she said, a Detroit police officer told three Spanish speakers to leave a police station if they were going to speak another language.

Rita Denha, president and director of Executive Language Services, said police often call upon colleagues, relatives or friends of the people they are dealing with to interpret. In court, she said, interpreters fluent in English and the needed language are better adept at conveying legal terms.

There is no universal form of certification required of interpreters or translators, but there are tests to determine proficiency, according to the U.S. Bureau of Labor Statistics.

Macomb County Chief Circuit Judge Mark Switalski prefers certified interpreters. But a defendant's relatives and Switalski's secretary, who speaks Albanian, have helped. "It's part of an access to justice" that those with limited English have an interpreter, he said.

The client could give an unintended admission because he or she doesn't understand the question. But "it doesn't create a great impression in front of the jury," if an interpreter is used, "especially if the person knows some English."

Proceedings can be adjourned if an interpreter is unavailable. That happened in the case of Leonart Nazarko, a native Albanian, who is to stand trial May 24 on first-degree murder in the 2009 stabbing death of his wife in their Chesterfield Township home.

Barie Shaqiri of Grosse Pointe Park, who speaks four languages, is his interpreter in Macomb County Circuit Court. During a pretrial Jan. 19, the jail-jumper-clad Nazarko asked, "What's going on now?" Then, in the low murmur of his dialect, she spoke in his right ear.

Shaqiri said the people she interprets for are more comfortable when they see her.

Welcome | About Us | Services | In the Press | Employment | Testimonials | Contact Us